HISTORY OF THE CITY OF CHINO

The first inhabitants of Chino in modern times were the Tongva, who had a settlement called Wapijangna in the Santa Ana River watershed. Some residents of Wapijanga were baptized at Mission San Gabriel, which was established in 1771. The Spanish crown claimed the land, at least nominally, until Mexican independence was finalized and possession fell to the Mexican government.

Some twenty years later, Mexican governor of Alta California Juan Bautista Alvarado granted Rancho Santa Ana del Chino to Antonio Maria Lugo of the prominent Lugo family. Two years later, his successor, Governor Micheltorena, granted an additional three leagues to Lugo’s son-in-law Isaac Williams, who took charge of the rancho. Williams kept large quantities of horses and cattle, which attracted the envy of raiding Native Americans as well as unscrupulous whites. One of the latter was James Beckwourth, who, in 1840, posed as an otter hunter and stayed at Rancho Chino to determine the location of the area’s animals, which he then reported to Walkara, the Ute mastermind of the raids.

Early in the Mexican-American War, the Battle of Chino took place at Williams’ rancho. The battle ended prior to the arrival of the Mormon Battalion, dispatched on behalf of the United States, who instead labored in the rancho’s agricultural harvest and constructed a grist mill.

During the California Gold Rush, the rancho was a popular stopover for travelers, and in the mining fury, coal was discovered there. In 1850, California was admitted to the union, and the process of separating privately-held lands from the public domain began. The Williams claim to the Chino Rancho was patented in 1869.

Richard Gird was the next owner of the Rancho. Beginning in 1887, his land was subdivided and laid out. It became the ‘Town of Chino,’ and incorporated into a city in 1910. Sugar beets, corn, and alfalfa were raised there.

Many historical elements of Chino were frantically demolished for speculation. A large house was demolished to build ‘Value Fair’ now a defunct shopping area on the corner of Walnut and Central. The City Central—Old Town, was demolished for the Courts, Police and City Hall, and now faces obsolescence as the Courts, Police and City Hall look for better places. The lower area of the City has always been prone to flooding, and Prado Dam areas are hazardous in times of rain. Race relations reached City wide proportions in the late 60s with many patrol cars burned. Chicano versus White and Chicano versus Black racial animosities have always been present since the late 60s in the Chino region.

In the 1970s, Chino developed into a small suburban city, forming the western anchor of the Inland Empire region, and now the city’s development has gradually taken on a more middle-class character. There are still many industrial areas as well as farm animals such as goats and chickens. According to the 2004 FBI UCR, the city had about 3.6 violent crimes per 1,000 population, which is typical for an American suburb, and its property crime below average

WHERE DOES CHINO CITY WATER COME FROM?

The city of chino’s drinking water supply is a blend of surface water (rivers, lakes, streams) and groundwater (wells). surface water is imported from Northern California by the Metropolitan Water District (MWD) of southern California via the State Water Project aqueduct and is treated at the Agua de Lejos Water Treatment Plant located in Upland. Groundwater supplies are extracted via local wells operated by the city of chino or by the Chino Basin Desalter Authority (CDA). In 2017, treated groundwater represented approximately 75% of your drinking water supply, while the remaining 25% was produced by the Agua de Lejos Water Treatment Plant.

source water assessments were conducted in 2001, 2007 and 2017 to determine the contamination vulnerabilities of the city of chino’s active wells. You may request a summary of the assessments by contacting the state Water Resources Control Board Division of Drinking Water (sWRcB-DDW) District Engineer at (909) 383-4328.

ARE THERE CONTAMINANTS IN CHINO CITY WATER?

The sources of drinking water (both tap water and bottled water) include rivers, lakes, streams, ponds, reservoirs, springs and wells. As water travels over the
the surface of the land or through the layers of the ground it dissolves naturally-occurring minerals and, in some cases, radioactive material, and can pick up substances resulting from the presence of animal and human activity.

SHOULD I DRINK AND BATHE WITH CHINO CITY WATER STRAIGHT FROM MY FAUCET?

The USEPA and the federal Centers for Disease Control guidelines on appropriate means to lessen the risk of infection by Cryptosporidium and other microbial contaminants are available from USEPA’s Safe Drinking Water Hotline at (800) 426-4791 between 10 a.m. and 4 p.m. Eastern Time (7 a.m. to 1 p.m. in California)- source: 2017Rowland Water consumer confidence report.

Installahighefficiencytoiletorclotheswasher.Atemporary rebate program is still available. Other rebates are also available for sprinklers and artificialturf. To learn more, visitwww.ocwatersmart.com.

MWDSC has its own water conservation website. To find out more information on water saving plants and other useful tips, visit www.bewaterwise.com.source: 2017

CHINO RESIDENTS should make sure that their plumbing systems are in good working order and are leak free. This is important, not only for saving money on you water bill and limiting damages to property, but it is our responsibility to provide clean fresh water for future generations.

Sanitation staff is responsible for ensuring the reliability of the entire sewage system infrastructure in order to make certain that all wastewater generated within the City limits is delivered to a treatment facility for further processing. 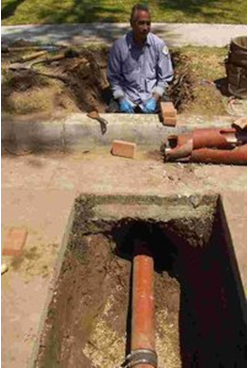 Call and ask about our Chino residents specials