HISTORY OF THE CITY OF SANTA ANA

The Santa Ana area was explored in 1769 by a Spanish expedition led by Gaspár de Portolá. The first people who came to the area named the newly founded settlement Rancho Santiago de Santa Ana in honor of Saint Anne.

It quickly became apparent that the ground was fertile for crops and cattle grazing. The city grew to become a farming community that fed the area. Many of the original settlers used the area for crops while a small portion raised cattle.

As more people came to the area in the early 1860s, it was determined that there would need to be a plan for the city’s layout. The community was officially laid out in 1869, and the plans for the city’s development went into effect.

Following the implementation of the plan, the city was renamed, Santa Ana. With major growth in new arrivals to the area, local industries continued to grow as well. Santa Ana was chosen to be the seat of Orange County.

Santa Ana quickly became a center for commercial, financial, and manufacturing businesses that today produce numerous electronic parts, sporting goods, and aerospace equipment. The city has become a major hub for much of the economic activity in southern California.

WHERE DOES SANTA ANA CITY WATER COME FROM?

SANTA ANA’S water supply is a blend of local native surface water and imported Metropolitan Water District (MWD) water impounded within Santiago Reservoir. Additionally, groundwater is pumped from the local aquifer managed by OCWD that stretches from the Prado Dam and fans across the northwestern portion of Orange County, excluding the communities of Brea and La Habra, and stretching as far south as El Toro.

ARE THERE CONTAMINANTS IN SANTA ANA’S CITY WATER?

The sources of drinking water for Santa Ana’sresidents (both tap water and bottled water) include rivers, lakes, streams, ponds, reservoirs, springs and wells. As water travels over the
the surface of the land or through the layers of the ground it dissolves naturally-occurring minerals and, in some cases, radioactive material, and can pick up substances resulting from the presence of animal and human activity.

SHOULD I DRINK AND BATHE WITH SANTA ANA’S CITY WATER STRAIGHT FROM MY FAUCET?

The USEPA and the federal Centers for Disease Control guidelines on appropriate means to lessen the risk of infection by Cryptosporidium and other microbial contaminants are available from USEPA’s Safe Drinking Water Hotline at (800) 426-4791 between 10 a.m. and 4 p.m. Eastern Time (7 a.m. to 1 p.m. in California)- source: 2017Anaheim Water consumer confidence report.

Install a high efficiency toilet or clothes washer. A temporary rebate program is still available. Other rebates are also available for sprinklers and artificial turf. To learn more, visitwww.ocwatersmart.com.

MWDSC has its own water conservation website. To find out more information on water-saving plants and other useful tips, visit www.bewaterwise.com.source: 2017

SANTA ANA RESIDENTS should make sure that their plumbing systems are in good working order and are leak-free. This is important, not only for saving money on you water bill and limiting damages to property, but it is our responsibility to provide clean freshwater for future generations.

Your sewage system is connected to the City sewer main through a sewer lateral. As an owner, you are responsible for maintaining the lateral from the property all the way to the connection with the sewer main.

In the event of a blockage in your sewer line, immediately stop using water and call a licensed plumber. Never let sewage overflow into the street or storm drain.

Usually, after clearing the lateral, a licensed plumber will assess the condition of the pipe by televising it. If the pipe has a break or a crack, you are required to repair the portion of the pipe that lies between the house and the property line.

If the plumber finds a break-in or collapse of the lateral beyond the property line, or if you need assistance to contain a spill, call Public Works for help at (714) 647-3380. 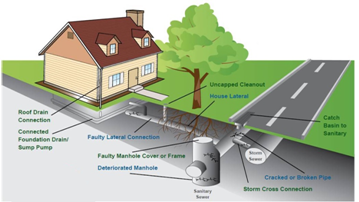 The leading causes of stoppages are tree roots and cooking grease. Maintaining your home’s plumbing system clean and open can save you a great deal of money and eliminate the aggravation of a sewage backup. Here are a few simple tips:

Call and ask about our Santa Ana residents’ specials.