HISTORY OF THE CITY OF HUNTINGTON BEACH

The area of Huntington Beach was originally occupied by the Tongva people, also known as Gabrielinos, whose lands stretched from what is now Topanga Canyon through Aliso Creek in Laguna Beach.  European settlement can be traced to Spanish soldier, Manuel Nieto, who in 1784 received a Spanish land grant of 300,000 acres, which he named Rancho Los Nietos, as a reward for his military service.  The Stearns Rancho Company ran cattle and horses and raised barley crops on what is now the city of HB.  In the early 1800’s a portion of property was sold to Col. Robert Northam, who raised and sold barley to surrounding ranchers.  By 1889, the city was called Shell Beach and consisted of a small group of settlers.  In 1901, Shell Beach was changed to Pacific City when P.A. Stanton formed a local syndicate and purchased 40 acres along the beach with 20 acres on each side of Main Street.  Stanton’s dream was to build a town on the Pacific Coast which would rival Atlantic City on the East Coast.

Huntington Beach incorporated in 1909 under its first mayor, Ed Manning.  Its original developer was the Huntington Beach Company, a real-estate development firm owned by Henry Huntington, a railroad magnate after whom the city is named.  The Huntington Company is still a major land-owner in the city.  Huntington Beach remained a sleepy seaside town until the famous oil boom in the 1920’s.

The initial growth of the city began with the oil boom in 1920.  This was the largest California oil deposit known at the time.  Wells sprang up overnight and in less than a month the town grew from 1,500 to 5,000 people.  After a final oil strike in 1953, the fire department began clearing out oil derricks within the city and along the coast to make room for the population explosion that began in the 1950’s.  Beginning in the late 1950’s and continuing into the 1960’s and 1970’s, residents by the thousands moved into the City.  Huntington Beach became the fastest growing city in the continental U.S. as housing tract after housing tract were built.  In the 1970’s and 1980’s oil production rigs were concealed to improve the beach’s image.  Forty years ago, Donald Douglas Jr. acquired the bean fields across from the current U.S. Weapons Station bordering Bolsa Chica in HB.  He began building the Douglas Aircraft Space Systems Center.  The plant produced the upper stage of the Saturn V rocket that took the Apollo astronauts on their successful mission to the moon.  Douglas aircraft became McDonnell Douglas, and in the 1990’s Boeing purchased the combined firms.  Today Boeing is one of the largest employers in HB.

WHERE DOES HUNTINGTON BEACH CITY WATER COME FROM?

The City’s water supply is a blend of groundwater from 7 City wells and 3 imported water connections originating from Northern California and the Colorado River by MWDSC via the Municipal Water District of Orange County (MWDOC). Groundwater comes from a natural underground aquifer that is replenished with water from the Santa Ana River, local rainfall, Groundwater Replenishment System (GWRS) recycled water, and imported water. The groundwater basin, which is managed by OCWD, is about 350 square miles. It lies beneath north and central Orange County, from Irvine to the Los Angeles County border and from Yorba Linda to the Pacific Ocean. More than 19 cities and retail water districts draw from the basin to provide water to homes and businesses.

ARE THERE CONTAMINANTS IN HUNTINGTON BEACH CITY WATER?

The sources of drinking water (both tap water and bottled water) include rivers, lakes, streams, ponds, reservoirs, springs and wells. As water travels over the
the surface of the land or through the layers of the ground it dissolves naturally-occurring minerals and, in some cases, radioactive material, and can pick up substances resulting from the presence of animal and human activity.

Install a high-efficiency toilet or clothes washer. Atemporary rebate program is still available. Other rebates are also available for sprinklers and artificialturf. To learn more, visitwww.ocwatersmart.com.

MWDSC has its own water conservation website. To find out more information on water saving plants and other useful tips, visit www.bewaterwise.com.

HUNTINGTON BEACH RESIDENTS should make sure that their plumbing systems are in good working order and are leak free. This is important, not only for saving money on you water bill and limiting damages to property, but it is our responsibility to provide clean freshwater for future generations.

Questions regarding the Sewer Lateral Program should be directed to the Public Works Utilities Division at 714-536-5921.
*Please note – the first course of action for a blocked or clogged sewer line is a call to a qualified plumber or sewer contractor. Often times, cleaning of the line is needed immediately and residents should not wait for the claim process to be completed. The need for frequent cleaning/rooting of the line is an indication of a possible sewer lateral break or tree root intrusion 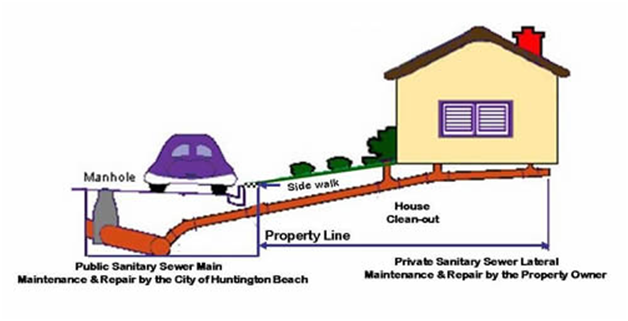 Call and ask about our Huntington Beach resident’s specials