HISTORY OF THE CITY OF LOS ALAMITOS

The first school was built in 1881 at what is now Katella Avenue and Los Alamitos Boulevard.  Although most of the workers in the fields were Mexican, many immigrants from Belgium, France, and Germany came here to work and establish their own farms and businesses. When nematodes (burrowing insects that fed on the roots of the plants) destroyed the sugar beet industry, the sugar refinery was closed down and eventually leased, in 1921, to a Dr. Ross, who used it to process wild horse meat into dog food. The 1929 depression, followed by damage caused by the 1933 earthquake, ruined this enterprise. Dr. Ross died a pauper, and eventually, the mill was torn down.

While the sugar mill was prospering, Los Alamitos had become a throw-back to the typical wild west town. Reagan Street was the principal thoroughfare until Los Alamitos Boulevard was blacktopped in 1921-22. There were two hotels in town, and reportedly an average of two shootings or stabbings occurred every weekend. Katella was a country road that led to the entrance of a farm on the edge of Coyote Creek. It was named after the two daughters of the farmer, “Kate” and “Ella,” who, well into their eighties, were proudly present when “their” road was named and dedicated.

Following Pearl Harbor (December 7, 1941), the U. S. Navy moved its training field for aircraft from Terminal Island to Los Alamitos, where a 1,300-acre tract was commissioned. Here, Navy and Marine fliers were trained, as well as fliers from Australia, New Zealand, England, Free France, Poland, and Norway. Its presence revitalized the sleepy country town of Los Alamitos, bringing new settlers and businesses to the area. When the war ended, the airbase was used as a reserve training field for military fliers, being operated under control of the Navy. It was reactivated during the Korean and Viet Nam conflicts, after which the Navy turned it over to the California National Guard.  The Joint Forces Training Base now serves as a reserve training center for all branches of the military, as well as for its own personnel.

On March 1, 1960, the township of Los Alamitos became a chartered city.  The city of Little Cottonwoods was affectionately described as A Jewel of a City.  The City’s seal, designed by longtime resident William A. Daniels, captures the ancestry of the region.  The official flower, the Daisy, reflects the importance of our City’s youth since it was nominated by a young boy because it was his mother’s favorite flower.  Still embracing its small-town ambiance, the City offers excellent recreational and park facilities, a stellar police department, and an enthusiastic Chamber of Commerce.  With its outstanding schools, friendly neighborhoods and strategic location at the crossroads of two major freeways, Los Alamitos keeps its roots in history and it’s future vested in those who cherish this special community.

WHERE DOES LOS ALAMITOS CITY WATER COME FROM?

ARE THERE CONTAMINANTS IN LOS ALAMITOS CITY WATER?

The sources of drinking water (both tap water and bottled water) include rivers, lakes, streams, ponds, reservoirs, springs and wells. As water travels over the surface of the land or through the layers of the ground it dissolves naturally occurring minerals and, in some cases, radioactive material, and can pick up substances resulting from the presence of animal and human activity.

Pesticides and herbicides, which may come from a variety of sources such as agriculture, urban stormwater runoff and residential uses.

SHOULD I DRINK AND BATHE WITH LOS ALAMITOS CITY WATER STRAIGHT FROM MY FAUCET?

The USEPA and the federal Centers for Disease Control guidelines on appropriate means to lessen the risk of infection by Cryptosporidium and other microbial c0ontaminants are available from USEPA’s Safe Drinking Water Hotline at (800) 426-4791 between 10 a.m. and 4 p.m. Eastern Time (7 a.m. to 1 p.m. in California)- source: 2017Los AlamitosWater consumer confidence report.

Install a high-efficiency toilet or clothes washer. A temporary rebate program is still available. Other rebates are also available for sprinklers and artificial turf. To learn more, visitwww.ocwatersmart.com.

LOS ALAMITOS RESIDENTS should make sure that their plumbing systems are in good working order and are leak-free. This is important, not only for saving money on your water bill and limiting damages to property, but it is our responsibility to provide clean fresh water for future generations. 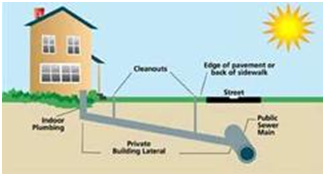 The Sewer Division is responsible for the maintenance of the City’s sanitary sewers system.  Sanitary Sewers are cleaned regularly, and their condition is continuously monitored. This is crucial to prevent failures and backups.  Maintenance activities performed to comply with the City’s National Pollutant Discharge Elimination (NPDES) program and all environmental regulatory agency requirements.

The City utilized both in-house personnel and contractual services to maintain the City’s storm drain facilities. Activities include minor maintenance of the storm drains, curbs and gutters, catch basis, and other drainage structures.

Call and ask about our Los Alamitos residents specials